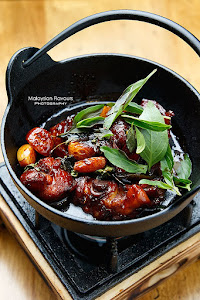 So if you're up for some Peranakan dishes along with extraordinary dessert, D'Cuisine should be one of the finest choices.

Our visit to D’cuisine is truly satisfying. Food are great, service is polite and friendly. Do not get intimidated by its outlook which is grandeur, as food prices in D’cuisine is generally acceptable. Just, the classy ambience is one of their principles to provide diners with comfortable, relaxed dining environment. Walk in, don’t step back! Do not leave without trying their dessert.

They are a part of the D'Group establishment of restaurants, which also includes D'Italiane and Ketchup. They started from a humble Italian restaurant in Section 9 of Shah Alam and from there, they expanded to Jaya33 in 2007, Sunway Giza in 2009, Paradigm Mall in 2012 and one year later, here in Plaza33. They aim to bring to diners variations of modern fusion fare that blends Eastern and Western flavours, something that was evident in their extensive menu.

4 new dishes recommended by the chef that you can try out as well.

Overall Rating: 8/10. I had a wonderful meal today. There's just something interesting and memorable about the dishes here. The basics were done right with sprinkles of icing sugar on top - if that metaphor serves me right.

After 2 visits here, we're think D'Cuisine has the potential to catch on in the near future.