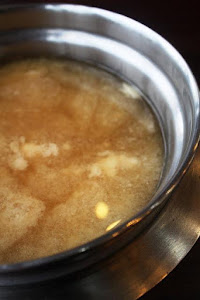 The food at Tsurukame Shabu-shabu is way overpriced and the choices are very limited. The food items were made with low quality meat and they don't even taste fresh. They hire waiters/waitresses who don't seem to understand the customers' needs. The ice container hasn't been washed for years and you can see mold spreading on the lid.

I will NEVER visit this place again.

It was quite disappointed as the steamboat ingredients choice is too less and all other food is below average.

Tsurukame Shabu-shabu (鶴亀しゃぶしゃぶ) actually reminds me of Tsuruya Japanese Restaurant (鶴屋日本料理), another Japanese restaurant located in I-Avenue; I actually half expected the same thing when I entered. What Tsurukame offered was a buffet style shabu-shabu, not unlike the buffet style hot pot (火锅) in Chinese restaurants which bloomed recently.

The novelty in the shop lies in its choice of broth - you get to choose 2 types of broth from a choice of 4 to start your own shabu-shabu: Chinese chicken stock, miso, kimchi and tom yam. All four types represent tastes from four different nations and cultures - Chinese, Japanese, Korean and Thai. I am not one for strong tastes, so I opted for Chinese chicken stock and miso broth, and the clear liquid did not let me down. The yellow-tinged chicken stock broth is crystal clear and serves well with most food, but with miso soup to provide an additional choice, the combination is perfect though slightly light in taste. Maybe I should have chosen one of the stronger taste broth to go with another lighter broth instead...

There are 2 ways in which one could get their food in Tsurukame - most of them are delivered through the conveyor belt rolling past your place silently, or you could take the rest of them from an area near the entrance of the restaurant. Obtaining food from the latter could be tiring for those sitting furthest from the entrance, which houses the beverages as well; but then again, the furthest spot from the entrance are seats blessed with the view of sea, so it may not be such a bad idea after all.

Beverages are free flow, and so is the ice-cream. There are a variety of both to choose from, but the variety is limited as well. Although the food is nothing to scream over, it does prove to be satisfying to be seated facing the seaside view, watching the hustle and bustle of traffic in contrast to the calm sea beyond.