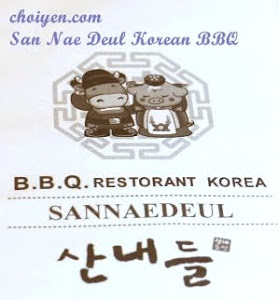 San Nae Deul is non-halal with meaty assortments of pork, chicken and beef, all available either in BBQ or non-BBQ styles. The rest of the menu is also extensively filled with Korean delicacies such as jiggae, fried rice, soups, and many more.
The marinated chicken slices were served raw for barbecuing on the table itself. The marination was sufficient and flavourful, satisfactorily good when wrapped in lettuce with the Korean sauce. The grilling hot pan is imported from Korea to provide intense heat and immediate cooking. Plus, it doesn't emit much smoke hence it doesn't require any exhaust pipe protruding from the ceiling (which very often seems to take up ample of space and pretty annoying) for ventilation purposes. It is advisable that grilling be done with care and it doesn't take more than a couple of minutes for your meat to reach its optimum cookedness so over-grilling will cause parts of your meat to be charred. If you aren't confident of barbecuing yourselves, seek assistance from San Nae Deul's team of servers who are very adept at grilling for you.

I love the wide variety of banchan offered and we can easily get a private room here.