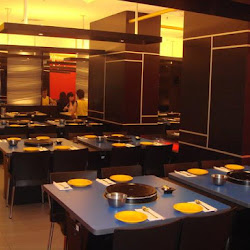 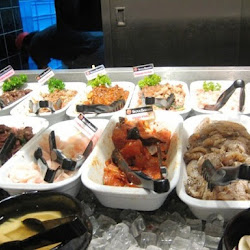 At first, I was skeptical going to Seoul Garden in 1 Utama for their steamboat/grill lunch as I was not a big fan of buffet steamboats as quantity overshadows quality. 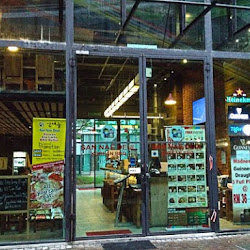 Good selection of meat as well as the quality was equally satisfying. For the price charged, I think it was indeed irresistible. I was a satiated customer left with satisfactory. 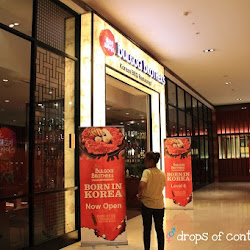 If you are a big eater, and have a penchant for good thick slabs of beef, then go for Bulgogi Brothers' Unyang Burger, a burger piled high with meat. A hefty delight of home-made premium beef patty, layered with American cheese, beef brisket in savoury sauce and garnished with crispy shredded potato sandwiched in a toasted charcoal bun, the Unyang Burger do offer a rather unique and nice combination of flavours. 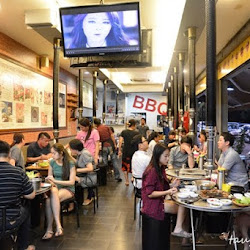 Sae Ma Eul is a long time Korean barbecue joint that uses charcoal for the barbecue pit. Even though the restaurant is not air-conditioned, the ambience is still casual and clean. It is also always brimming with people!

‘Olle’ is narrow pathway surrounding Jeju island. The routes pass through various landscapes along the way including small villages, beaches, farms, forests and parasitic volcanoes. Our Philosophy is simple. The pathway to the nature is here. Anytime come and take a time

Since my previous visit, Cafe Olle has certainly improved in their variety of hot dishes available. During this review, I tried their bulgogi rice set, which is highly recommended!

1. Overall, the dining experience is pretty satisfying albeit expensive. 2. For hot food, I personally recommend the Cheesy Topokki if you need something filling and spicy. 3. But the ultimate reason to visit Hanbing is still for its signature Bingsu desserts.

Our favourite Korean rice drink! It is lightly sweet, soothing, helmed with aroma of barley malt. Must-order! I case you want to have rice wine with alcohol content , try Mokkoli, which pairs well with Korean Seafood Pancake and Kimchi Pancake.

Well, it’s a place worth to try. Do order their set as its price reasonably with quite huge portion. Do be patient waiting for your food as the couple doing their best to serve everyone.

The marinated pork ribs were pretty good too, though I still prefer the pork belly as it's more fatty. Do also eat it while its hot as it gets a little chewy once cold. Overall, we enjoyed our meal here as the meat and ban chan is tasty and service is good. There is also another Korean restaurant in Taman Desa, but for those who do not like queuing, this is equally as good.

They serve authentic korean dishes…Daorae serves high quality food with simple, relax environment…The other good thing about Korean restaurant is the unlimited refill of Ban-Chan (small dishes served along with meal). The most popular and common small dishes is Kimchi.

Visited this branch on 2nd Mar 2014. Found a plastic wrapper debris in my side dish. So I asked for manager, but the waiter refused and took the side dish away and just changed a new one for me, without any apologies.

To add on, we ordered the Pajeon as well. It is a very satisfying dinner with a group of great people.

The best as usual was the sides as the opening and I also loved the Spicy reddish Korean soup.

San Nae Deul is non-halal with meaty assortments of pork, chicken and beef, all available either in BBQ or non-BBQ styles. The rest of the menu is also extensively filled with Korean delicacies such as jiggae, fried rice, soups, and many more. The marinated chicken slices were served raw for barbecuing on the table itself. The marination was sufficient and flavourful, satisfactorily good when wrapped in lettuce with the Korean sauce. The grilling hot pan is imported from Korea to provide intense heat and immediate cooking. Plus, it doesn't emit much smoke hence it doesn't require any exhaust pipe protruding from the ceiling (which very often seems to take up ample of space and pretty annoying) for ventilation purposes. It is advisable that grilling be done with care and it doesn't take more than a couple of minutes for your meat to reach its optimum cookedness so over-grilling will cause parts of your meat to be charred. If you aren't confident of barbecuing yourselves, seek assistance from San Nae Deul's team of servers who are very adept at grilling for you.

Onsemiro Fine Dining Korean Restaurant at Intermark Kuala Lumpur is one of the hidden gems for Korean food, also one of the very few Korean restaurants in KL that offers weekend buffet, which you may not know.