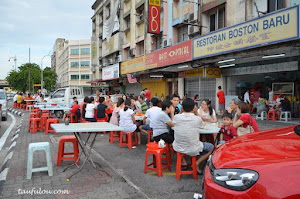 The name Boston is never new or foreign to Klang folks, even among several places beyond the Klang boundary. It has also become a universally known Chinese restaurant where you have to wait damn LONG for the food to be served.

However, surprisingly, the crowd is always notable and amazingly, people are willing to sacrifice their time and energy waiting for it.

Steamed Lala is one of the signature dishes in Boston, generally a must-order there. The average-sized clams are steamed along with abundant of ginger, pepper, cili padi (known also as bird's eye chili pepper) and some Chinese liquor. Then it is topped with fried garlic which provided an aromatic twist to it. The clams are cooked just right and the soup is truly divine! It has to be eaten while hot and be prepared to spice up your buds.

I think Boston's chefs are really skillful as the clams cannot be overly cooked, otherwise they would shrink and harden.

Steam Lala is a definite must, as they steam it just nice. Not overcooked

However i always cringe about the waiting time. We arrive at 7pm and ordered almost immediately and will get the food about 8pm (average waiting time)

There was once we actually waited 1 hour 30 min, because they forgot. We wanted to take off, we were soooo hungry we just had to wait another 20 min.. sigh....

The lala – clams were fresh and juicy but what I liked most was that they were clean with none of the muddy bits commonly found in lalas. There were generous sprinklings of ginger strips and chopped chilli padi and these added enough heat to the Chinese wine-enhanced delicious soup bathing the lalas. Needless to say, we slurped up every single drop of the broth with great relish.

No doubt that this is one of the best yet reasonable price on food that I have come across as those 3 dish cost me RM38. I am surely going to return for more with more people to try out more stuff. – Highly Recommended!