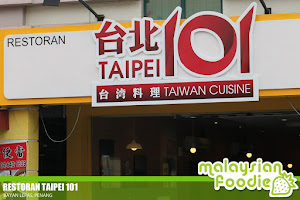 Overall, Taipei 101 could be quite an ideal place for a quick and simple meal without worrying much on your budget. Food wise, they are not much into the authentic Taiwanese cuisine but a bit more towards fusion food.

Its name is Taipei 101, so what else do you expect apart from Taiwanese delights? Well, actually they do serve other varieties as well. Japanese and Chinese meals are also one of their selling points, and frankly I do love to try out each of everything from each of its pages.

You wouldn't be consuming Taiwanese food without getting their famous pearl milk tea (珍珠奶茶)! Taipei 101's ice blended drinks and cold drinks are a definite must for a hot and sunny afternoon to cool your heat down. I personally loved the Mint Pearl Milk Tea, especially the cooling minty sensation that gets through you from every sip.

There are a few dish within its claypot rice series which I find most satisfying. All of these meals are served with the chowder still bubbling from the hot pot. I loved the Seafood Claypot Rice, which despite its undistinguished English name, belies the deep flavor of this dish. This dish actually could be counted as a Chinese dish instead of Taiwanese, but who is counting anyway.

The large part of Taipei 101's menu is provided in Bento sets (弁当), those rectangular boxed sets which made its way from Japan to Taiwan and became popular in the latter. Unfortunately, I do not find these particularly helpful in my meals, since the rice just kept stuck at the corners where the spoon cannot reach.

If you are just looking for a snack, you could always look to Taipei 101's side dishes. Despite its name, some of these dishes could be taken as snacks, which what most Taiwanese did, while some others could be ordered to complement whatever meal you planned for.

Their special home-made chilies are not to be missed as well. The best part is there is no service charge at all.