The food was nice and it was worth coming again. 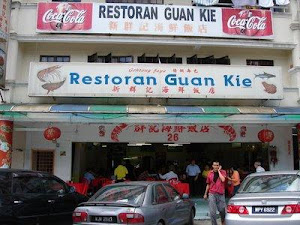 RM103 for river prawn vermicelli and RM3 for tea

Avoid at all cause. This place is a tourist trap. I had the river prawn vermicelli in claypot for RM 103 and tea for RM 3. It had 2 prawns in it and a rather big bowl of vermicelli. Taste was alright which is probably the only reason why i put a 1 star. Service was poor and when I asked them about the price they initially told us it would cost about RM 40-50 per bowl and when the bill came it was RM106. There were no price tag on the menu.We asked them the price of the prawns and the waiters and waitress which was mainly consist of myanmar workers and very old chinese locals became very defensive and rude. They said the price of the prawns are all on the board which was RM11/100gram and they weight all the prawns beforehand. For RM103 based on our calculation, the prawns must weight a good 936gram- ( 468gram per prawn ) which is ridiculous as our prawns would weight a max of 600gram-700gram. the shops cleanliness was below average too.

Why is tomorrow a public holiday? Why?

Jules eating guide to Malaysia & beyond