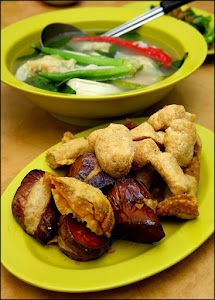 was so disappointed with this shop right now. I am really fed up with the attitude of the lady boss and her stuff. After I order the food i try to fill the small plate with the usual chilli sauce but I found that it was left a little bit only then I ask the lady boss to refill it for me she react as if I am the one who consume all chilli she told me to use a bit enough la! It really come to me as a surprise as I thought such word shouldn’t came out from a busness-minded boss. Ok so fine , then when i was on my way to the toilet i found out that their is somelike of delicious sause that could be try one so i decided to take a bit to let my family member try but i was stop by the lady boss again as she warn me not to take this sause as it was only dedicated to those who order the chicken only and i was told that I am not suppost to take it myself! Fine I left it back there then! After that,I try to connect their wifi but my phone just cant connect to it anymore and this is very unusual case as i have been there since long time ago. Every time it was a successful attempt but not until today, i can no longer able to access to the internet when i thought well the password might be changed by the boss. So I decided to ask the stuff regarding about the password first, they not only doesnt give me the password they also act like a fool playing around! When I ask the stuff ,he tells me that the wifi is spoil , when my mother ask the other stuff he say the system down. As i know they all are lying as i could detect their wifi so eventually i decided to went up to the cashier to find the arrogant lady boss she told me in a very rude way that the wifi is not for customer use one! It really shock me and spoil my lunch mood ! I was here to have lunch but not your punchsack ok?! The service are suck as her stuff act unseen me when i ask them to add water for the tea pot. Some of them even ignore me after I show my hand as a sign of asking them to come my place. Service are really really bad !
My advice to another who decided to go there to think twice ! As the price of the food is not any cheaper than any restaurant in kepong! Strongly not advice any of you to go ! My father even told me that people change their attitude when they become rich because they thought they have establish their name well !

Chan Chan Yong Tau Foo is a popular YTF shop in Bandar Menjalara, Kepong, do not look anymore if you are eyeing for a meal of Yong tau Foo in this locality just go to this place and try it out .

Decent yong tau foo (YTF) - at least the ingredients are fresh, portion is quite generous for the price paid, & the overall dining experience was acceptable.

On the whole, yong tau foo was pretty good. service was brisk prolly because it’s already past lunchy time. i would definitely come back again if i have a craving for yong tau foo.