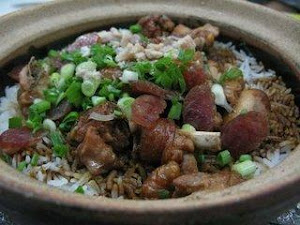 The menu (variety of choices)

This could be my favourite claypot chicken rice, the rice grain is good without being mushy or hard, there is no overwhelming soy sauce, just enough of sauce to have some of the rice still looking white, and only chicken thigh/drumstick meat used, very nice!

As far as claypot chicken rice is concerned, Choong Kee ranks as one of my top three in PJ and KL. Soup wise though, it’s at the bottom of the list.

The soup is full of flavor and I like it...If the soup is hot enough, it would be better.

Choong Kee (Kampar) Claypot Chicken Rice located in Damansara Jaya was the place for it. But the wait was awful, almost close to 30 minutes.

Although the seats and table had double or even triple the previous stall, but it's all full. So you bet that you require to wait for at least 10 - 15 minutes for your chicken rice to come. So I reckon for you to call in to make your reservation and also order some soup to drink while waiting for the main dish.