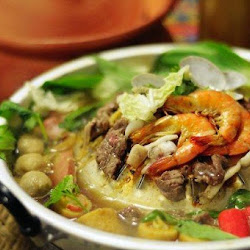 Liki Liki restaurant introduced the now-signature "Chim Chum" which is a buffet grill and steamboat-dining concept. This restaurant is one of the branch of Food Village restaurant from Kelantan. The buffet package is consist of marinated meat, chicken, seafood and authentic Bangkok Laksa,Mango Sticky rice and also include fruits and desert. Ala-carte thai food also available. Bad service and bad attitude of the lady boss. After the waitress serve the wrong dish she insisted it was right & explained its cook in thai style. So after we ate, they serve the right dish & insisted that we pay for the wrong dish eventhough its not our fault bcoz we have eaten it. But before we eat we have confirmed with the waitress. Its not the customers fault that the staff is new. The owner should not blame customers, throw tantrums & make customers pay for her own staff's mistake. Its her own fault that her staff is not properly trained. It is really trying to con customers. I urge all rational consumer to boycott this restaurant.

A muslim Thai food restaurant which specializes in Tom Yum as well as the fruit juices.